Board of Education » Transition to By-Trustee Area Elections

The Centinela Valley Union High School District (“CVUHSD”) Board of Education (“Board”) is currently elected in from-trustee area elections, where Board members reside in specific trustee areas, but each Board member is elected by voters of the entire District.

At prior Board meetings, the Board received information and discussed the CVRA. On March 10, 2020, the Board approved a resolution indicating its intention to transition to a by-trustee area elections system. CVUHSD will conduct a series of public hearings to receive community input on the composition of proposed election geographic areas for Board of Education seats. It is of the utmost importance that residents participate and provide feedback during the upcoming public hearings. It is the District’s desire to ensure that the proposed By-Trustee Areas reflect communities of interest and that the community is involved in this process.

The District will be using the services of an independent, professional demographer to prepare draft trustee voting area maps for community and Board review. The demographer will work with the District’s legal counsel to ensure that all draft trustee area map options are in compliance with the CVRA and other districting requirements. The process of establishing the trustee areas will involve using the most recent demographic data from the 2020 Census, in addition to other, accepted population and demographic information.

As shown below, at its regular meeting of June 28, 2022, the Board will hold the first of the two required pre-map drawing public hearings, and the public is invited and encouraged to provide input on the composition of potential trustee voting areas.

After holding the required public hearings, the Board will adopt one of the proposed trustee area maps and seek final approval of the selected map and CVUHSD’s transition to by-trustee area elections from the Los Angeles County Office of Education Committee on School District Organization (“County Committee”).  If the County Committee approves the change, by-trustee area voting would begin with the 2024 Governing Board election, held on the General Election Tuesday, November 5, 2024.

The dates, times and locations of the upcoming public hearings are shown below.  The public is invited to attend any or all the public hearings on CVUHSD’s transition to by-trustee area elections.  If you cannot attend a hearing or meeting and wish to review and/or comment regarding on the composition of the potential trustee areas as well as on the proposed trustee area maps, once created, please do not hesitate to submit your comments and feedback to the following email address: [email protected] . 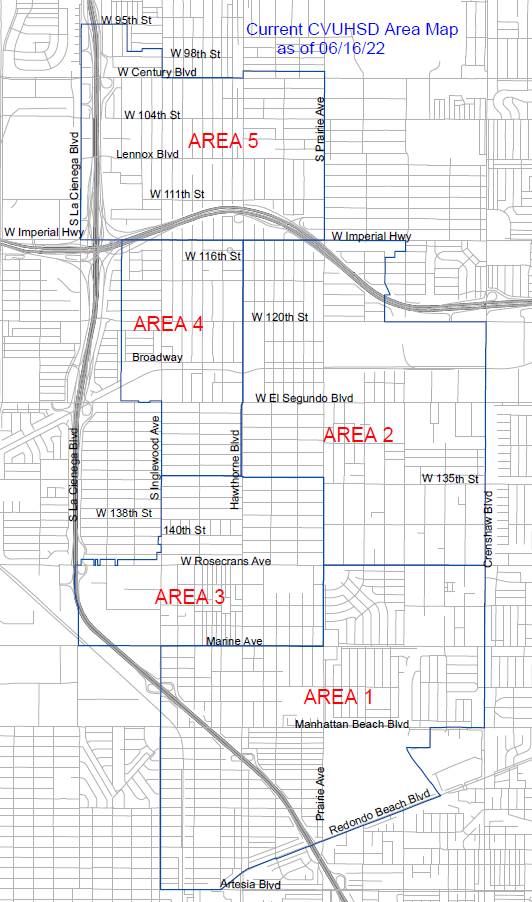 WHY SHOULD THE CALIFORNIA VOTING RIGHTS ACT MATTER TO ME?

What is the (California Voting Rights Act) CVRA?

The California Voting Rights Act (CVRA) prohibits the use of any election system “that impairs the ability of a protected class to elect candidates of its choice or its ability to influence the outcome of an election.”  Should an individual challenge a public entity’s election system and the court finds against that jurisdiction, the jurisdiction must change its election system and pay the plaintiff’s attorneys, experts, and other expenses.  The only safe harbor from a CVRA claim is to implement a by-trustee area election system.

Does this change where students attend school?

No – this new system for electing Board members has NO IMPACT on your student’s high school attendance area.  Attendance areas are NOT being changed as part of this process.

How will this transition impact me?

If approved, District voters will have the opportunity to vote for a candidate for the Board of Education who lives in their trustee area on a four-year cycle.  Voters will not be able to vote for candidates from trustee areas in which they do not reside.

What is the difference between “At Large” Elections and “By-Trustee Area” Elections?

How and when will the final map be chosen?

The Board will consider a range of factors when it chooses to select a map of five geographic areas as part of the transition to a By-trustee area election system.  These factors include (but are not limited to) equal population, communities of interest, compactness, contiguity of the districts, visible/natural boundaries, voter input, and continuity in office.  After a series of public hearings, the Board will vote to adopt one of the trustee area map options.  The Los Angeles County of office of Education Committee on School District Organization will then conduct a public hearing before making a final decision whether to approve the District’s adopted map and transition to by-trustee area elections.

What if there is no candidate in one of the trustee areas?

If 83 days before a scheduled election, no candidate has been nominated for a particular trustee area and an election will not be held, a vacancy occurs, and the Education Code authorizes the Board to appoint a qualified individual who lives in the vacant trustee area to the Board.  Such an appointment must occur at a Board meeting prior to the day fixed for the election and the appointee will be seated at the District’s annual organizational meeting as if elected in the District election.  The appointee must be qualified to hold office and reside within the specific vacant trustee area.  Unlike with most vacancies, an individual appointed to the Board because of a failure to elect will serve "as if elected," i.e., the for the full four-year term.